What happens now to the EU’s GDPR and the UK’s domestic data privacy laws?

In this blogpost, learn more about the GDPR in the UK and how to become compliant with Cookiebot consent management platform (CMP).

Since the UK has left the EU, the question of personal data transfers has been top of the list for many websites, companies, and privacy organizations in both blocs.

In the agreement signed by the UK and EU in end of December 2020, a provision allowed for the continued, unrestricted flow of data between the two blocs for an interim period of six months (until June 2021).

On June 28, 2021, the European Commission adopted an adequacy decision for the UK, ensuring the continued free flow of personal data between the two blocs for the next four years.

Under the EU’s GDPR, adequacy decisions can be adopted by the EU if it deems that a third country (i.e. a country outside of the European Union) has an equivalent level of data protection. If so, personal data from EU residents can be transferred to the country freely (still requiring end-user consent, as always of course).

Since the UK left the EU under Brexit, the UK is not covered by the GDPR anymore, and adequacy talks have been a point of importance to ensure continued flow for websites, companies, and organizations in both blocs.

Particular to the UK adequacy decision from June 2021 is a so-called “sunset clause” that strictly limits the free flow of data to a 4-year period from the effective date, after which the adequacy status of UK will not automatically be renewed. If the EU chooses to renew the agreements, a new adoption process will start.

The UK already has in place a new domestic data privacy law called UK-GDPR that is exactly the same as the EU version and is supported by the UK’s Data Protection Act of 2018.

Compliance with the UK-GDPR and EU’s GDPR remains an obligation for any website, company or organization who process personal data form either inside the UK or EU: the explicit consent of users must be obtained before any processing or transfer is allowed to take place.

See the ICO’s consultation on data transfers to and from the U.K. from August 2021


GDPR compliance after Brexit in 2021

Cookiebot CMP by Usercentrics is the world-leading GDPR compliance solution for websites of all shapes and sizes.

Built around a powerful scanner that detects all cookies, trackers and trojan horses, Cookiebot CMP gives your users automatic control of their personal data, in full compliance with the requirements of both the EU and UK data privacy regime.

By simulating visitors on your website – scrolling, clicking, exhausting all possible uses of your domain – Cookiebot CMP detects trackers present, both first party (your own website’s) and third party (usually marketing cookies from ad tech companies that are privacy invasive).

With highly customizable consent banner and automated geo-targeting, Cookiebot CMP takes the hard part out of being compliant with the world’s major data privacy laws.

Learn more about the GDPR and consent The United Kingdom has been regulated by the European GDPR since it took effect in May 2018.

Upon leaving the EU on January 1, 2021, the UK is officially not a part of the EU’s GDPR any longer, i.e. the EU’s GDPR does not have any domestic jurisdiction in the UK as it had from May 2018.

The UK has passed its own version called the UK-GDPR, which alongside the Data Protection Act of 2018, is in effect now.


Learn more about the UK-GDPR

After Brexit on January 1, 2021, the following data laws has taken effect in the UK: 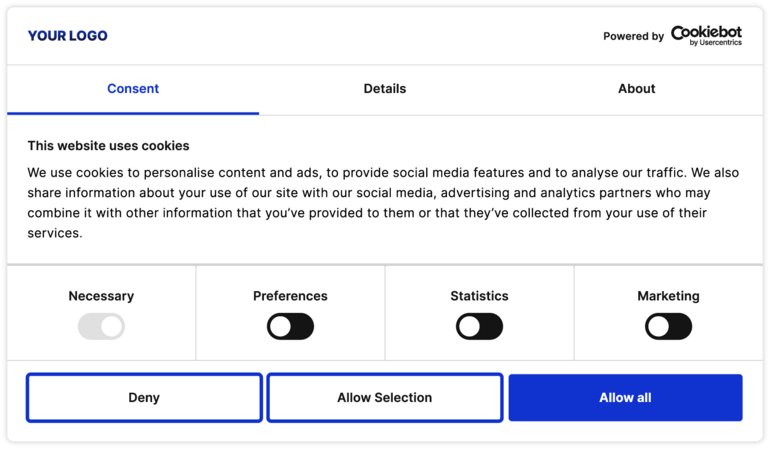 Who enforces GDPR in the UK?

While the UK was still a part of the European Union, it was the responsibility of the Information Commissioner’s Office (ICO) to enforce the EU's GDPR on UK soil.

However, since the UK is no longer an EU member state, the main responsibilities of the ICO will now be to enforce its own domestic version, the UK-GDPR, and the supporting Data Protection Act of 2018.

The EU's GDPR is enforced by the national data protection authorities (so-called DPAs) in each EU nation, although special responsibility and power falls to the Irish DPA for being the lead regulator of the GDPR in EU. After Brexit, you must comply with the new UK-GDPR, the Data Protection Act 2018 and the PECR.

The UK has an adequacy agreement with the EU, ensuring the free flow of personal data between the two bloc for a four-year period (until June 2025).

Try Cookiebot CMP free for 30 days - or forever if you have a small website.


GDPR and the UK

In June 2021, an adequacy decision was made by the EU for the UK, ensuring the free flow of data for a strict four-year period (until June 2025).

After this period, the EU must renew adequacy talks in order to determine whether the UK still offers an equivalent level of data protection for EU residents and their data privacy.

Since Brexit, the new UK-GDPR is in effect domestically in the UK and means the same data protection and requirements apply as before under EU law.

The ICO is the lead enforcer of the UK-GDPR, Data Protection Act of 2018 and PECR.

Learn more about the ICO

PECR is a domestic law in the UK regulating electronic communication and continues to apply after Brexit.

Does the GDPR apply in UK after Brexit?


Who will enforce the UK-GDPR?

The Information Commissioner’s Office (ICO) is the lead supervisory body and enforcer of the UK-GDPR. The ICO has the power to conduct criminal investigations, adopt guidelines and issue fines for non-compliance.


What is personal data under the UK-GDPR?

Learn more about GDPR after Brexit

Learn more about the GDPR after Brexit